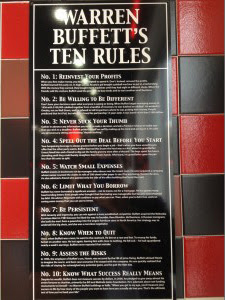 Jimmy Johns gave me a blast from the past.  I recently resigned from my job and for my last meal I wanted to visit a restaurant that I have been craving since I graduated college in 2004. When we arrived I felt like I was back at The Ohio State University in the early 2000s, making a choice between ramon noodles and a Jimmy Johns sub, while listening to an O.A.R. CD.  However the reality was that I am 31 years old now, we car-pooled to Huntington (West Virginia) in order to save gas, and we could not stay long because someone had a meeting after lunch.  Even with all of that boringness, Jimmy Johns delivered just like I dreamed it would and additional people were introduced to Jimmy Johns’ glory.

Why is Jimmy Johns Epic?

Jimmy Johns not only serves a great gourmet sandwich but I have always felt that the experience was what created this legend in my mind.  The company philosophy of an honest, fast experience with a decent price is coupled with a delivery that is billed as “subs so fast that you’ll freak,” helps to make it a favorite on college campuses.  I think that we can all learn from this in respect to the business development process of innovation, qualification and orchestration (The E-Myth Revisited) a great product that creates a customer experience that has in my experience built an eight year craving that has finally been met.  If you talk to others that had a similar experience in college then they will express their loyalty to this restaurant.  On the history section of their website I found this to be useful in explaining why I like them so much:

“Make a deal, keep a deal” is the Golden Rule. Do it now – make it happen – be a go-getter, no excuses. Jimmy Johns’ employees are the ordinary people doing extraordinary things. They want to be the best. They don’t mind doing whatever it takes to get the job done. Their hustle is part of how they live their daily lives, and they enjoy the fruits of a hard-earned entrepreneurial lifestyle. http://www.jimmyjohns.com

As an added bonus to the visit, my friend Josh pointed out one of the many signs that are placed throughout the store, which is very applicable to the small business wisdom subject matter.  From searching the internet the regarding this sign, it seems that many have noticed and were influenced by the displaying of Warren Buffet’s Ten Rules for Success.  I found them insightful and useful so here they are: